Like most British bird guides, Frank birded all over the UK in his teens, first venturing abroad on a birding trip at age 16. A few years later, he set out with friends on an epic eight-month overland adventure, driving from the UK through Europe, Iran and Afghanistan to India and Nepal. A couple of years after that, he birded overland for 7 months from Egypt, through the Sudan to Uganda and Kenya. Since then, he has birded in most parts of the planet, aided by living in Asia for more than 20 years and in South America for another seven.

After getting his degree in Ecology at the University of East Anglia, Frank spent four-years studying fruit-eating birds in Malaysian lowland rainforest for which he was awarded a PhD from the University of Aberdeen. He went on to study birds in logged forests at the now famous Danum Valley conservation area in Sabah, Borneo, before working for various international conservation NGOs (most notably BirdLife International) in Indonesia, Thailand, Philippines, Vietnam, and Cambodia. Subsequently he birded widely in South America, using Cusco, Peru, as his base.

Although Frank led some tours in Southeast Asia in the 1990s, it was not until 2004, when Manu Expeditions employed him in Peru, that he became a professional bird guide. He has guided numerous birding tours in Asia, Australasia, and the Americas. Even whilst working as a bird guide, Frank has devoted much of his spare time to birding off the beaten track, as well as undertaking voluntary conservation-related survey work in the Amazon and Marañón regions of Peru, Atlantic forests of Brazil, in various reserves in Colombia and Paraguay, on Codfish Island (New Zealand) and in East Timor.

Frank has written more than fifty papers on birds and is the author of the Pica Press guide to Pittas, Broadbills and Asities. He has made numerous discoveries of significance including finding several new birds to science (Talaud Rail, Talaud Bush-hen, Sangihe Scops Owl, Rufous Twistwing) and is a passionate bird sound recordist and has made sound recordings of more than 4,500 species.

Currently Frank lives with his wife Lia near Cley-Next-the Sea, Norfolk, one of Britain’s best-known birding destinations, where he spends much of his spare time birding his local patch. 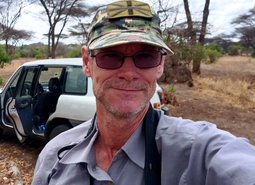 Frank Lambert will be leading on the following tours...

NEW: A two week holiday to the only English speaking country in South America

The Forests of the Manu Road and Biosphere Reserve

The Forests of the Manu Road and Biosphere Reserve