Fernando is our resident Spanish expert, a bird tour guide, all-round naturalist and biologist whose home is at Algeciras overlooking the Strait of Gibraltar.

As a child, he was fascinated by the kettles of raptors that formed above his home and being born in the Strait, Europe’s most important bird migration route, helped shape his love of birds and nature. At 18, Fernando became one of the youngest bird ringers in Spain, while his eagerness to learn about more and more species led him to travel widely in Europe, Africa, Asia and Central America.

Despite his relatively young age, he has already worked on projects with Montagu’s Harriers, Lesser Kestrels, Griffon Vultures and White Storks as well as studying the effects of wind farms on birds. Spanish is Fernando's first language but his command of English is excellent and he is a delight to travel with, earning rave reviews from participants.

He leads our tours to Guatemala and Belize as well as several across the Iberian Peninsula. Having lived and worked in north, central and southern Spain, he knows the birds of all these regions exceptionally well. 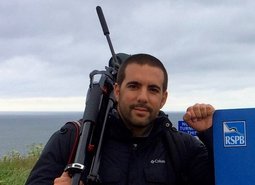 Fernando Enrique Navarrete will be leading on the following tours...

The Algarve In Autumn

Balearic Birding at its best!

A 7-day, single-centre, small group birdwatching tour to Fuerteventura, in the Canary Islands

An 11-day birdwatching tour to the coast, deserts and mountains of Southern Morocco